3dsMax viewport lags a lot. What to do about it.

I recently had a problem with 3dsmax where the viewport was super slow. No matter what I did, it took several seconds for the viewport to refresh. I had around a million and a half polygons in my scene, but the PC at work is not the average machine: The hardware I have is top notch.

At the beginning I thought the problem was that the buildings in my scene where instances of other buildings and each instance was actually a group, not a single object. After taking the time to convert each building into a unique object, the scene was still laggy.

So, the next step was to turn into the drivers. In the past, I have fixed some viewport problems with them, but in general the default D3D (short of Direct3D) driver is good.

So, I started delving into no-man's land and I realized that, in addition to the D3D and OpenGL drivers, there was a new boy in town. The third option is a new driver called "Nitrous". I asked Google is he knew about it, and of course he did.

Nitrous is a new technology developed by Autodesk that is supposed to be better than both of the previous instances. My PC at work didn't have the option to select it, I had to revert the current D3D driver in order to get the option. 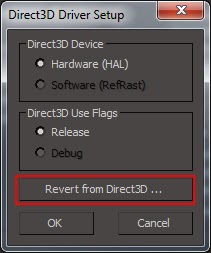 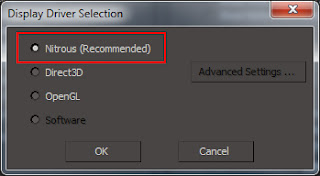 Once I restarted Nitrous, the difference was impressive. The lags were noticeable less laggy and the overall feel of the viewport was smoother.

So, if you have problems with your viewport, check your driver (after you have check your scene first!). Please note that I'm not sure since when the Nitrous driver is available. I have 2012 version installed, so I can't confirm if previous versions support it.

Here 's the link of the post that I checked in order to fix this problem.

Posted by Ricardo Ayasta at 1:05 PM